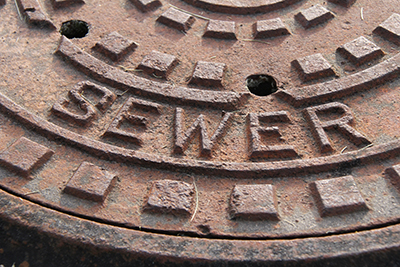 Discussing aging underground infrastructure and recent societal impacts on sewer backups. This article is reproduced with permission from Sintra Engineering Inc. With the recent release of the Flood maps by the City of Edmonton, we thought it relevant to provide you with background on one of the causes of the issue.

Sewer backups are likely one of the most repugnant disasters a homeowner can experience. Not only is there water damage and the potential for mold and rot that comes with all water damage claims, there is an additional health risk from bacteria and human waste. Sewage disposal has been on engineering minds for centuries and managing human waste is not a new endeavor. In fact, the Alberta Building Code and the National Plumbing Code both contain mandated requirements to prevent sewer backups. Homes built under these codes require backwater (or backflow prevention) valves and the use of new materials such as ABS and PVC, which have improved the durability of sewage systems. So why, after several hundred years has the problem not been resolved and why do sewer backups continue to occur?

One primary factor influencing sewer backups is aging underground drainage infrastructure. Pipes that were installed between 1930 and 1960 have reached the end of their life cycle but due to high replacement costs, still remain in place. Aging infrastructure is a problem for primarily two reasons, outdated design and degrading materials.

First, design standards have changed and been updated over the years in order to increase the safety factor. Current standards have abolished the practice of combining sewer mains or interconnecting sanitary pipes with storm drains, but this was common practice during earlier decades and many older neighbourhoods still have this design. Interconnecting sanitary pipes and storm drains can cause large areas to experience sewer backups simultaneously. Newer code requirements isolate the sanitary system from sudden surges due to rainfall events. In addition, home water usage has changed over the years leading to a disconnect between original design conditions and actual operating conditions. For example, home laterals (the sloped horizontal pipes connecting the residence drainage to the city drainage system) may not be adequately sloped to handle the minimal water usage of low flush toilets. Further, municipalities in a constant battle against urban sprawl have sought to increase density by converting single dwellings to duplexes, adding basement and garage suites as well as putting in row housing or low rise condominiums on unused sections of land. The increased number of dwellings requires more bathrooms, kitchens and laundry facilities which significantly increases the flow in pipes. This increase in density is also targeted close to the city center where sewer infrastructure is often the oldest and the least equipped to deal with the additional demand. As such, detailed engineering calculations are required to determine whether the pipes are adequately sized to handle the increased flow, or if costly upgrades are necessary.

The second reason aging infrastructure is contributing to sewer backup situations is the materials and condition of the pipes still being used. On the municipality side, aging infrastructure can cause an increase in infiltration and extraneous flow that was not originally accounted for in the design. For example, leakage at joints or breakage in upstream clay pipes can cause a significant increase in flow when high groundwater levels are experienced. In addition, repaving and settling of streets can lead to manholes being inundated during heavy rainfalls and an increase of storm water in the sanitary system.

Aging infrastructure in residential sewer lines is also a problem. For example, in the 1950’s, most residence sewer pipe laterals were constructed with a type of pipe known as “Orangeburg” or “No-Corrode.” Orangeburg got its name from the city that developed it in the late 1800’s (Orangeburg, New York) and is a bituminous fiber pipe (i.e. wood pulp and tar formed into a pipe). This type of pipe was fairly revolutionary for its time and has held up fairly well but it does have several key weaknesses. It is exceptionally prone to ground movement and root intrusion leading to frequently broken and clogged pipes. In addition, its lack of strength bearing allows it to oval and flatten significantly, lowering the pipes hydraulic capacity. Many homeowners are unaware of the inherent risk posed by an old sewer line. It is an item rarely covered in a typical home inspection, because it is out of sight and easy to ignore until something happens. Many think the addition of a backwater valve on their old pipe removes all risk of a sewer backup occurring. This is not the case.

Although some preventative measures can be taken (such as installing backwater valves), they are not without their limitations. Backwater valves (also known as backflow prevention valves) are a relatively new method of protecting a building from sewer backups, but contrary to popular belief, it only protects the building in specific circumstances and does not remove the risk of a backup altogether. A backwater valve is meant to operate as a check valve, allowing flow away from the house and preventing flow back into the house. This is effective in preventing backups from sudden pressure surges due to large rainfall events where city sanitary and storm lines are interconnected (such as in some older neighbourhoods). The sudden increase in pressure shuts the valve, preventing water from entering the house until the water level subsides and proper flow can be restored.

Consider the instance of a clogged lateral to a residence. As toilets are flushed and sinks are used, the water will flow down the main drainage stack to the blockage where it is prevented form going any further. It will then start to fill up the pipe. Once the water level reaches the backwater valve, the backwater valve shuts but water continues to flow into the pipe from where it is being used in the house. Eventually, the water will reach the level of a floor drain or toilet rim and the water will begin to overflow into the residence.

In summary, despite efforts made to improve engineering materials, update design parameters and install protective backwater valves, sewer backups still happen. Due to the high cost of replacement and the sheer amount of replacement required, outdated sewer systems remain in use posing an inherent risk to homeowners. On a positive note, recent advances in trenchless sewer line replacement technology have made sewer line replacements significantly less invasive and more financially feasible. Even so, it’s likely that aging sewer lines will remain an issue for years to come as the population density increases and current infrastructure ages.

Phenomenal customer service and support! Keegan has gone above and beyond looking after my family's insurance needs. I was frustrated being put on "ignore" by my last insurance company, and was referred to Roberts-McClure by a friend.....now I'm the one referring my friends. Thanks Keegan!

Many years ago they were a great company but unfortunately in the past year they have lost all their good brokers and they have gone downhill quick.

They seem to be jaded and uncaring and they are only out for money. It’s really too bad because they used to be one of the good ones but their staff is impossible to deal with now.